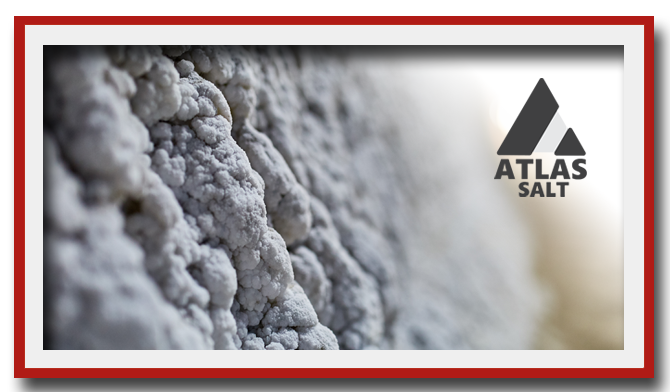 Atlas Salt Inc. (TSXV: SALT) (OTCQB: REMRF) (the “Company” or “Atlas Salt”) owns 100% of the Great Atlantic salt deposit strategically located in western Newfoundland in the middle of the robust eastern North America road salt market. The Salt market is anything but dull. Instead of listing, take a moment and check out the ‘Top 10 Reasons Atlas Brings the Power of SALT to Investors’ The list includes Management, the planned Triple Point spinout, Rising Salt Prices et al.

The global industrial salts market size was estimated at USD 15.3 billion in 2021 and it is expected to reach around USD 26.8 billion by 2030, poised to grow at a compound annual growth rate (CAGR) of 6.43% over the forecast period 2022 to 2030. Peruse the latest SALT corporate deck here.

Last Week, SALT got approval from the BC Supreme Court approving a Plan of Arrangement with Triple Point Resources.

The Company has set 12:01 a.m. on September 22, 2022, as the effective time and date for the closing of the Arrangement. Shareholders of record as at the close of business on September 21, 2022, will be entitled to receive one Triple Point share for approximately 3.58 Atlas shares owned. The exact number of Triple Point shares to be issued for each Atlas Salt share will be determined on the effective date.

Triple Point has applied to list its shares on the Canadian Securities Exchange which is subject to Triple Point meeting all listing requirements.

There are many, as this is a deep and enduring story. And unlike other commodities, Salt production and growth is easily trackable through a dearth of mines.

There is little doubt that Salt will continue to grow and be used for various chemical, industrial and consumable needs.

One of the more–dare I say exciting ideas –is a plan by a group of scientists who have suggested that, because Salt is highly reflective, it could potentially reflect sunlight into outer space, helping to cool the Earth, they wrote in a report presented at the Lunar and Planetary Science Conference in Texas on March 21.

But other climate scientists aren’t so sure. This idea falls into geoengineering — a deliberate, large-scale attempt to change the environment to counteract climate change—[Top 10 Craziest Environmental Ideas].

Creative solutions are needed for many of the Earth’s issues. Maybe not that far-fetched. Salt shares are robust traders with a daily average of 370k. Volatile as well as the 52-week range was CDN$0.71 to CDN$4.48. Looks like a proxy for several sectors and a catalyst for expansion in the industrial and chemical areas.

Given the volatility, a dollar cost average approach might be prudent.