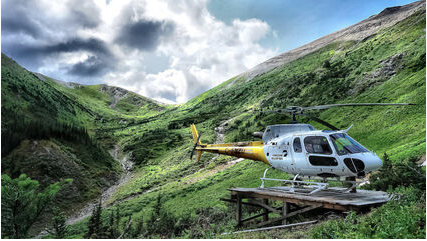 ZincX Resource Corp is a mineral exploration company which is based in British Columbia, Canada, targeting long-term mining potential of the Zn-Pb-Ag enriched Kechika Trough district. ZincX’s extensive tenure holdings are subdivided into two key projects as the Akie project ( Cardiac Creek deposit) and the Kechika regional project (Blue Sky exploration potential). This is a very stable mining company which is well capitalized with no debt.

The Akie project is totally based on the Akie property which is also named as Cardiac Creek deposit, consisting of 46 mineral claims covering 116km2. ZincX has 100% interest in the project after acquiring it 15 years ago. Development associated with the Cardiac Creek deposit is one of the key projects associated with the largest untapped Zn-Pb-Ag deposits in Canada. ZincX has drilled more than 150 holes covering a total length of 64000 meters which was very important in revealing the exact mineralization of the ore body. According to the latest investigations, this deposit contains indicated & inferred, 5.3 billion pounds of Zinc and 1 billion pounds of Lead. This deposit was first discovered by Inmet Mining Corporation through a drilling program carried out in the area. They were able to outline a historical deposit of 12Mt which grades as 8.6% Zn, 1.5% Pb, and 17.1g/t of Ag. But the later drilling program carried out in 2005 was able to expose an indicated resource of 22.7Mt with a grading of 8.32% Zn, 1.61% Pb, and 14.1g/t Ag, and an inferred resource of 7.5Mt with a grading of 7.04% Zn, 1.24% Pb and 12.0 g/t Ag  at a 5% Zn cutoff. The deposit is still open for further development at depth and along the strike. Preliminary Economic Assessment (PEA) of 2018 for Cardiac Creek envisions an underground mine with a potential of 4000 tones per day (tpd) which can operate for over 18 years. They estimated an annual production capacity of 178 million pounds of zinc and 20 million pounds of lead.

ZincX is currently the dominant tenure holder in the Kechika trough covering the prospective Gunsteel formation shales. This Kechika region holds a tremendous blue sky potential for additional discoveries and development of advanced prospects such as Mt.Alcock and Bear/Spa. ZincX has the ownership of eleven individual property blocks and consists of 184 mineral claims covering an area of 682km2. Extending from North to South, these properties are namely, Thro, Saint, Driftpile South, Bear/Spa, Weiss, Kwad, Mt. Alcock, Yuen North, Yuen, Cirque East and Pie. Out of these 11 deposits, they have 100% ownership in eight properties. They have 49% interest in the other three deposits namely Yuen, Cirque East, and Pie, having partnerships with Teck resources limited and Korea Zinc company limited.

ZincX is currently the dominant landholder in the Kechika district and because of that reason, they are gaining the interest of giant companies in the mining sector. The 2021 drilling program at Akie was funded by the Tongling non-ferrous metal group Cooperation Limited which is a Chinese state-owned enterprise and it is among one of the largest smelting companies in China. Tongling is now the largest shareholder of ZincX after beginning its investment back in 2009. Their latest investments in ZincX have resulted in a rise in share price by 400%. In addition to the Tongling, Teck and Korea Zinc are also interested in partnering with ZincX for exploration in the Kechika region. In 2013, they optioned three contiguous Kechika properties from the ZincX by investing in the further explorations and they also bought small stakes in the company doubling the share price as well.

In comparison with the similar types of mining projects globally, ZincX’s Cardiac Creek deposit stacks up well against the Taylor deposit of Arizona which is a similar type of high-grade zinc-lead silver sulfide deposit, in terms of their grades. But their present production capacity of 4000 tpd is well below the 10000 tpd of the Taylor deposit. Another good comparison to the Cardiac Creek deposit is Fireweed Zinc’s MacMillan pass deposit. It is composed of four zinc-lead-silver deposits namely Tom, Jason, the boundary zone, and the end zone. According to the estimations done in 2018, om and Jason deposits for an indicated category total of 11.21Mt at 6.59% zinc, 2.47% lead, and 21.33 g/t silver, containing 1.63 billion pounds Zn, 0.61 billion lb Pb, and 7.69Moz Ag. ZincX’s Cardiac Creek is well above this deposit in terms of Grade and estimated tonnage holding an indicated  22.7Mt at 8.32% zinc, 1.61% lead, and 14.1 g/t silver, with contained metal consisting of 4.16 billion pounds Zn, 0.80 million lb Pb, and 10.3Moz silver.